Fri, 03/09/2018 - 12:58
redakcja
When visiting clothing stores, most of us unfortunately do not realize at all how dangerous modern clothing can turn out to be. Only a small part of its composition is natural and obtained in a way that is harmless to the environment. 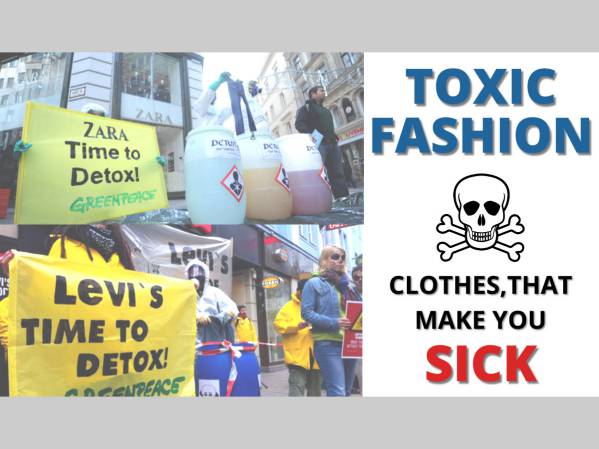 Although until recently clothing was sewn exclusively from wool, cashmere, cotton, silk, linen or even hemp or natural leather, most of today's clothes contain mainly synthetic fabrics. In addition, materials such as rayon, polyester, acrylic and nylon are almost always subjected to additional hazardous chemistry - mainly using chlorine compounds - for example, to obtain a smooth texture or better stain resistance.

Since 2011, the Greenpeace organization has been running the "Detox my fashion" campaign, which aims to make consumers aware of the fact that the clothing of popular brands contain substances hazardous to health, and to influence clothing manufacturers to stop using harmful chemicals during production.

However, as evidenced by numerous reports of this organization, toxic clothing is still available on the European and American market. 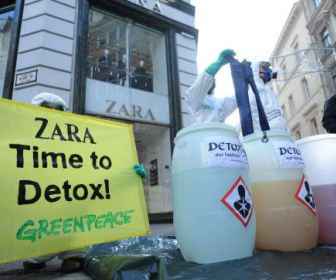 Dangerous compounds were found in the clothes of well-known brands such as Levi's, Zara, Gap, H&M and many others. According to research conducted by Greenpeace in 2014, wastewater samples taken from a large global fashion GAP supplier resembled a chemical cocktail and contained NP, antimony and tributyl phosphate.

The production of clothing of popular brands has moved to China many years ago, where no production standards are observed, so numerous toxic substances are allowed, which in Europe and America have long been on the black lists of chemicals dangerous to man and the environment. 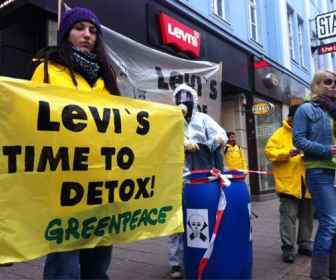 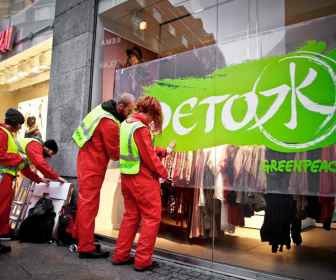 Clothes that we usually wear every day are - in fact - a product of the chemical industry and contain mainly polyester, acrylic, nylon, rayon etc. Check what is on the labels of your favorite clothes and you will see for yourself. Are all these synthetic materials bad for us? Well, in the light of the results of many scientific studies, synthetic fabrics used in the clothing industry can contribute to the development of diseases such as hormonal dysfunctions, cancer, impaired immunity and behavioral problems. Textiles used mainly - but unfortunately not only - in the production of modern sports and waterproof clothing as well as specialized work clothes turn out to be the most dangerous to our health. In the sportswear industry, brands such as Adidas, Nike and Puma perform very badly in this respect - see. Greenpeace report 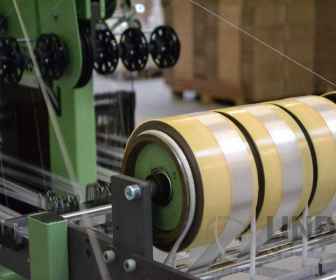 Polyester is the most dangerous choice for us among all synthetic fabrics. It is made of synthetic polymers, for the production of which dihydric alcohol esters and terephthalic acid are used. Unfortunately, these poisons are not completely removed from clothes during production processes, and through skin contact they enter our bodies. Unfortunately, despite its proven harmfulness, polyester is part of most modern clothing. Woven or knitted fabrics made of polyester thread or yarn, such as Terylene, Dacron and Lycra, are the most dangerous textiles for our health. Scientists have repeatedly and unequivocally confirmed the fact that chronic contact with polyester clothes can cause skin cancer and other cancers, chronic and severe respiratory infections, as well as various skin problems such as rashes, itching, redness and inflammation. In addition, frequent wearing of polyester clothes turns out to impair the quality of sperm in men and can be associated with serious behavioral problems in both sexes.

Polyester fibers cause allergic skin changes, increase the likelihood of asthmatic attacks and pulmonary diseases. Polyester has an adverse effect on the properties of the blood, without altering circulatory efficiency. Polyester clothing negatively affects the stimulation of the muscular system, resulting in a feeling of fatigue.
In addition to the negative and direct impact on our health, it is also worth mentioning that polyester is difficult to dispose of, and its production hard and irreversibly poisons the environment.

Acrylic fabrics are polyacronitriles and may cause cancer according to EPA.

Rayon is wood pulp or bamboo cellulose, which unfortunately - in order to ensure the product's resistance to regular use and washing - is subjected to health-hazardous chemicals such as carbon disulphide, caustic soda, ammonia, acetone and sulfuric acid. Carbon disulphide released from the fabric can cause nausea, headache, vomiting, chest and muscle aches and insomnia. Toxins contained in Rayon can additionally cause tissue necrosis, anorexia and Parkinson's disease in people who regularly wear clothing made from it. The very production of this synthetic is extremely harmful to our ecosystem, because it significantly poisons the water, destructively affecting the flora and fauna of our planet.

Materials such as acetate yarn (rayon) are made of wood fibers, called cellulose, and are subjected to extensive chemical treatment, of course, using substances that are hostile to the environment and human health. 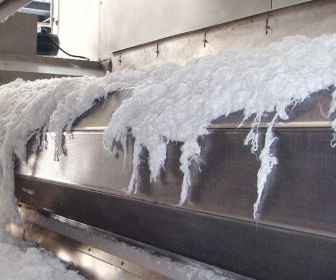 Nylon is made from petroleum and is sometimes subjected to hazardous health treatments with the use of dangerous chemicals, such as caustic soda, sulfuric acid and formaldehyde. What's more, the fabric is additionally treated with chloroform, limonene, pentene and terpineol. 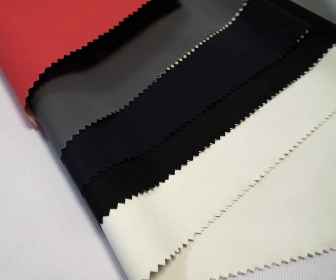 Nylon is very toxic to humans and may cause cancer, skin allergies, dizziness, headache, backache and severe nervous system dysfunction.

The synthetic materials from which popular clothes are made today and which already threaten our health in themselves are additionally subjected to various specific treatments during which preparations and substances such as:

Unfortunately, more and more often even natural origin textiles - such as wool or cashmere - are today subjected to the effects of dangerous chemistry.

Another dangerous ingredient that can seriously threaten human health and which is used in the textile industry is the so-called ethoxylated nonylphenol. In itself, it is not dangerous, but in water it breaks down into nonylphenol, which can cause various hormonal disorders and also strongly interfere with the functioning of the reproductive system. Representatives of the Greenpeace organization have repeatedly alerted that this relationship is found mainly in clothes manufactured in Asia - that is, in most products of well-known clothing brands. Greenpeace confirms that the toxins were in the clothes of brands such as H&M, Adidas, Nike, Puma and Calvin Klein. 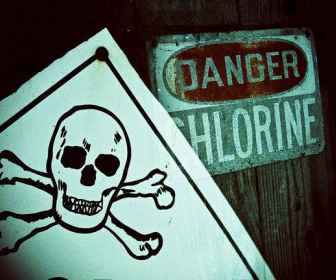 However, this is not all! In the clothes production phase, fabrics are usually pre-bleached with chlorine compounds to obtain a uniform color. During this process, toxic and carcinogenic dioxins are produced, which generally remain in clothing for a very long time.

Clothing with prints can contain high levels of lead and cadmium, and harmful nickel is very often found in metal accessories such as buttons. Care should also be taken with leather goods, because for its chemical treatment manufacturers mainly use chromium. For this reason, especially children should avoid such products.

Many people are very eager to buy clothes from China because they seem to be affordable. However, the truth is that they are often very cheap clothes, but their quality is adequate for the price and leaves much to be desired. They are usually counterfeits of well-known brands.

Clothes from China usually reach our country by ships, where they lie in dark and damp containers for many weeks, and then spend the next weeks in warehouses. What is happening to them there? Well, nothing terrible, because they are well protected against mold, fungus and other types of parasites. To this end, manufacturers stuff their products with very dangerous substances, which means that in addition to toxic chemical compounds, such as formaldehyde and other previously mentioned substances used during treatments, these clothes may contain other strong poisons. A few years ago in France, a 4-year-old girl almost died from an allergic reaction to a fungicidal substance contained in a dress from China. It was a diamethyl umaran!

The situation is similar with clothes that do not necessarily come to us from China, but in any case spend a lot of time in various broker stores before they go on sale. Also, they are often stuffed with antiparasitic agents and fungicides, which are dangerous for humans.

A big threat to health is used clothing bought in lumpexes. Do you know where the clothing goes to such places? Well, these clothes are very often removed illegally from the containers of the Red Cross, and are also collected in hospitals, boarding schools and old people's homes. By law, used clothing must be disinfected before sale. "According to the law, used clothes are waste. Only after disinfection and disinfestation can they be sold. Then they are treated as a new product" - said the spokesman of the Chief Sanitary Inspectorate. This means that used clothes generally contain very toxic substances. However, despite the applicable requirement, not all lumpexes fully comply with it, because the disinfection procedure is associated with additional costs, and therefore some clothes may contain bacteria and parasites that are dangerous to health.

How to minimize the risk

It is safest to give up buying clothing containing synthetic fabrics, or at least one that contains a high percentage of it. It is worth focusing on organic clothing, although it is not cheap. Because, as explained earlier, even natural fabrics are very often chemically treated today, newly purchased clothes should be washed several times before they are suitable for wearing. 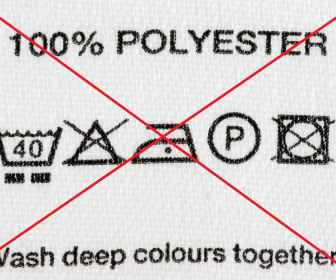 It is also worth avoiding cheap clothing with prints and leather goods, in particular attractive clothes from Asia and products sold at Chinese bazaars.